I am so glad I attended the 2017 Elevate Toronto Festival.

The theme was “Global Ideas Live Here”.  I believe that listening to the ideas of fascinating people is one of the best uses of my time.

I realized as the festival progressed that while Toronto is in the name, this was an event applicable to all Canadians.

This was a festival celebrating all of Canada, with Toronto as its technological hub.

Here are just a few of the highlights of this excellent 3-day festival: 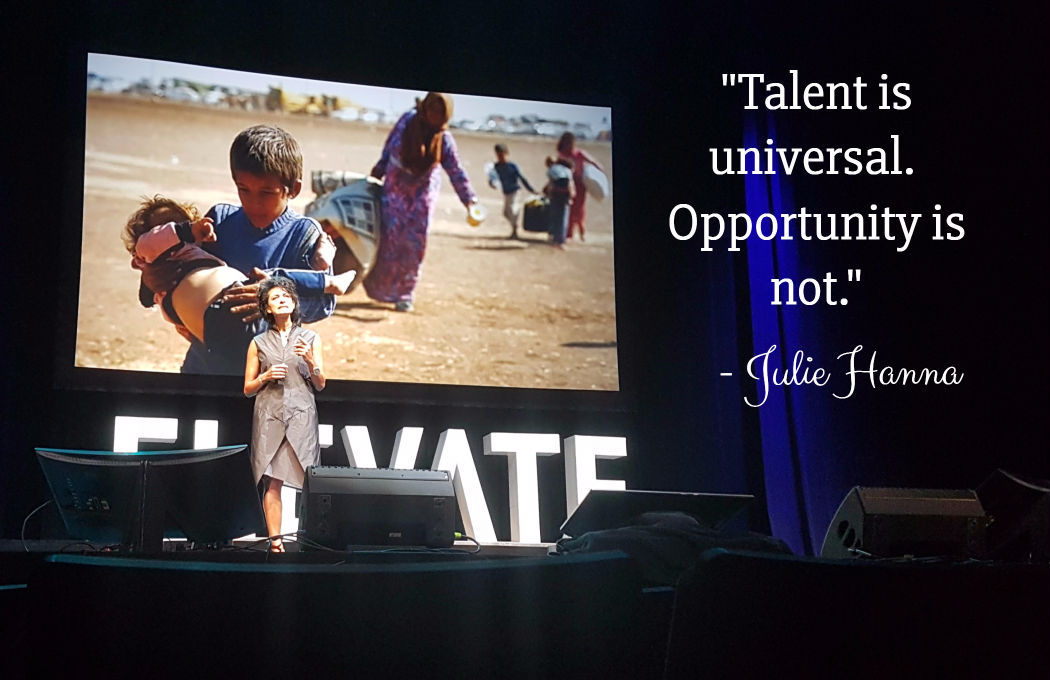 Julia Hanna serves as Executive Chair of the Board of Kiva, a peer to peer lending pioneer and the world’s largest crowd lending marketplace for global entrepreneurs.  In 2015, President Obama named her Presidential Ambassador for Global Entrepreneurship.

“And this is why dreams are considered such a serious business in Silicon Valley.”

Julie is a war survivor and refugee from Egypt (Black September).  Her family escaped to Lebanon and finally to the United States in 1972.  Though her parents were educated and resourceful, they couldn’t find work.  She came to understand that “a crippling experience can make us feel that it is us that is crippled”.

But this is not true.  You are not your situation.

Julie came to believe that she needed to do something to ensure that anyone, no matter where they live or where they are from, can have fair access to the resources that they might need to fully utilize their talent.  It’s one thing to have talent and ideas. It’s a completely different thing to have access to opportunity, and sufficient funds, to put that idea in motion.

This fair access would only come to be through advances in technology.  Julie got a computer science degree and headed to Silicon Valley to try to make a difference.

Since 2005, Kiva has crowdfunded nearly $1 billion dollars reaching over 2 million micro-entrepreneurs in 82 countries, at a repayment rate of 97 percent.

In recognition of her vision and global impact on economic and social progress, Hanna was named the United States Woman Icon of APEC and is a recipient of the 2016 Global Empowerment Award. 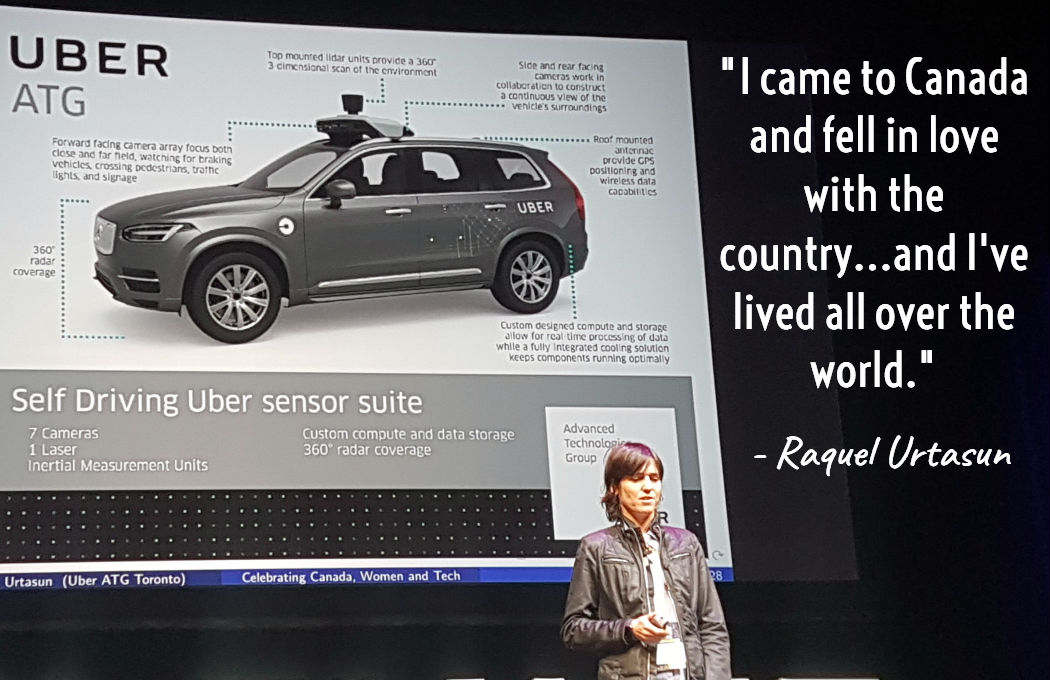 Raquel is an expert in machine learning, computer vision, robotics and remote sensing.  All of these areas combined make her the go-to person for self-driving cars.  She has a PhD in Computer Science and was a post-doctoral scholar at MIT and UC Berkeley. Raquel has taught at several universities around the world.  She is now Associate Professor and Canada Research Chair in Machine Learning and Computer Vision in the Department of Computer Science at the University of Toronto.

Raquel talked to us about her journey from her home town of Pamplona, Spain to finally deciding that Canada was where she wanted to live.  One of the reasons that she chose Canada was that we have always been at the forefront of Artificial Intelligence(AI) research.  Geoffrey Hinton, considered by many to be the Godfather of AI, is a British-born Canadian and is a Professor at the University of Toronto.

Uber decided to pursue Raquel to lead their research team for self-driving cars. She said:

Uber agreed and we should all feel lucky that Raquel Urtasun is such a fan of Canada. 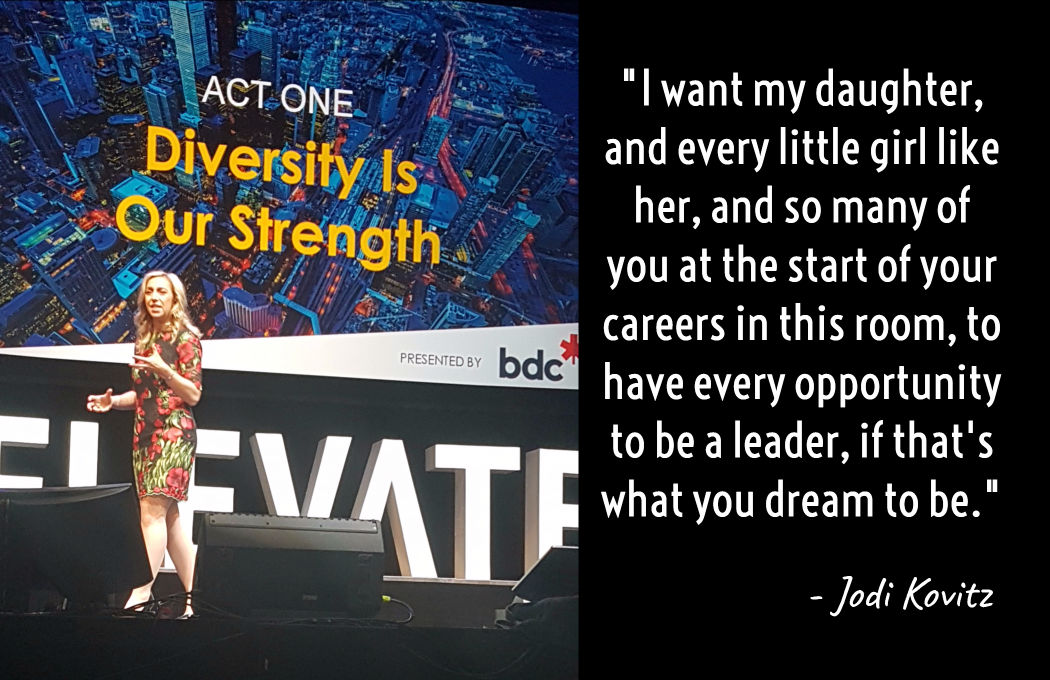 When Jodi became CEO of AceTech, a peer to peer organization that helps growing tech companies, she noticed that there were very few women leaders in the room.  Only 3% of the CEOs of tech companies in Canada are women.

To change this lack of diversity, Jodi founded #MoveTheDial, to increase female participation and leadership in tech.

Jodi’s life changed when her friend, who was very connected in the tech industry and had influence, used his influence to suggest that Jodi be included in the City of Toronto’s trade mission to Israel in the fall of 2016.  Having just started as a leader in the tech industry, this trip had a huge impact on her, building relationships and increased confidence that she didn’t have before.

This is what #MoveTheDial is about.  There are many people out there with influence, many of them men, who have the ability to “move the dial” for someone, by just taking a minute to send an email or a make a phone call.

It takes very little effort to make a connection between someone who you believe has potential to be great, and someone who can help them take that greatness to the next level.

Little steps have a ripple effect that could change the course of someone’s career. 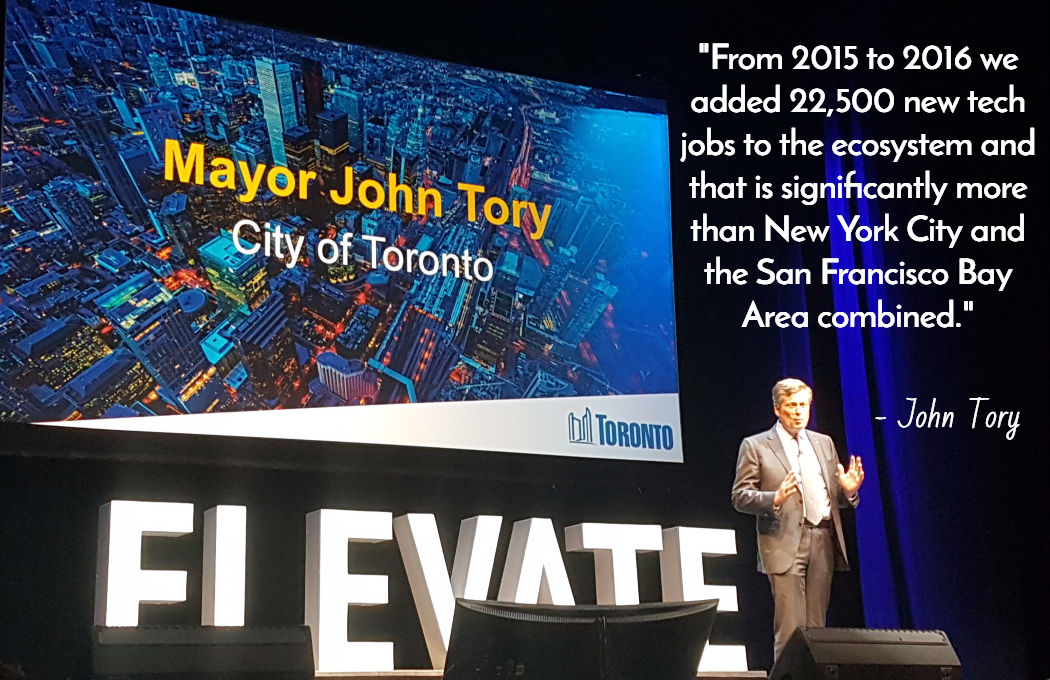 It’s always inspiring to hear John Tory speak about innovation and the future of tech in this country.

At the Elevate Toronto Festival the city officially announced the creation of a new Civic Innovation Office.  The city got a $500,000 multi-year grant from Bloomberg Philanthropies. The purpose of this grant is to help find technological solutions to problems facing the city.  Toronto is the first Canadian city to receive this kind of funding.

John Tory is constantly selling Toronto and Canada to the world.  It’s still tough to keep our tech talent from heading off to Silicon Valley. We have to keep building and advertising our tech hub here so that they stay.

Most countries have no problem advertising their star companies but in Canada we are still way too humble about bragging. That can make people underestimate our potential.

Shopify, FreshBooks, Wealthsimple, Wattpad, and Hootsuite are just a few examples of huge tech companies that started in Canada and still have their headquarters in Canada. 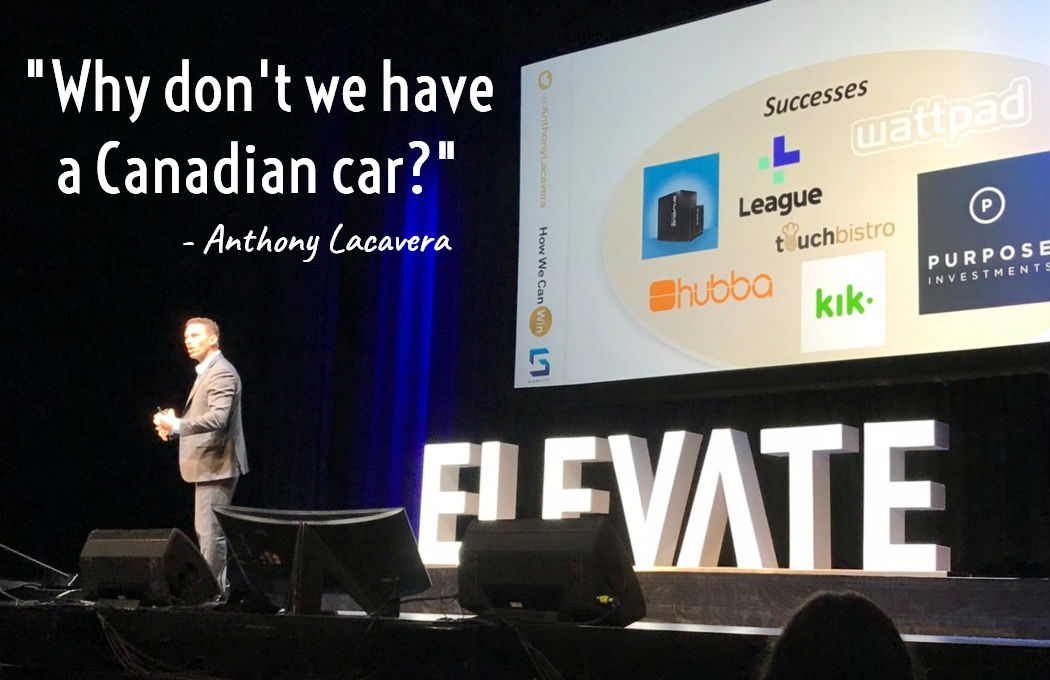 Anthony Lacavera is the founder of Wind Mobile(now Freedom Mobile). He is well known for his fearlessness about speaking his mind and going up against pre-established giants of the telecommunications industry.

Anthony is a huge advocate of changing the way we do business in Canada.  He believes we are “timid and risk-averse” when it comes to business. He repeatedly asked throughout his presentation why we don’t have a car made exclusively in Canada.  We have all of the resources but no Canadian car.  Why?

Contrary to John Tory’s opinion, Anthony believes that we should not have the new Amazon HQ here in Canada. Instead we should be directing those thousands of jobs to our great Canadian startups.

To find out more you can check out Anthony’s new book “How We Can Win: And What Happens to Us and Our Country If We Don’t” . 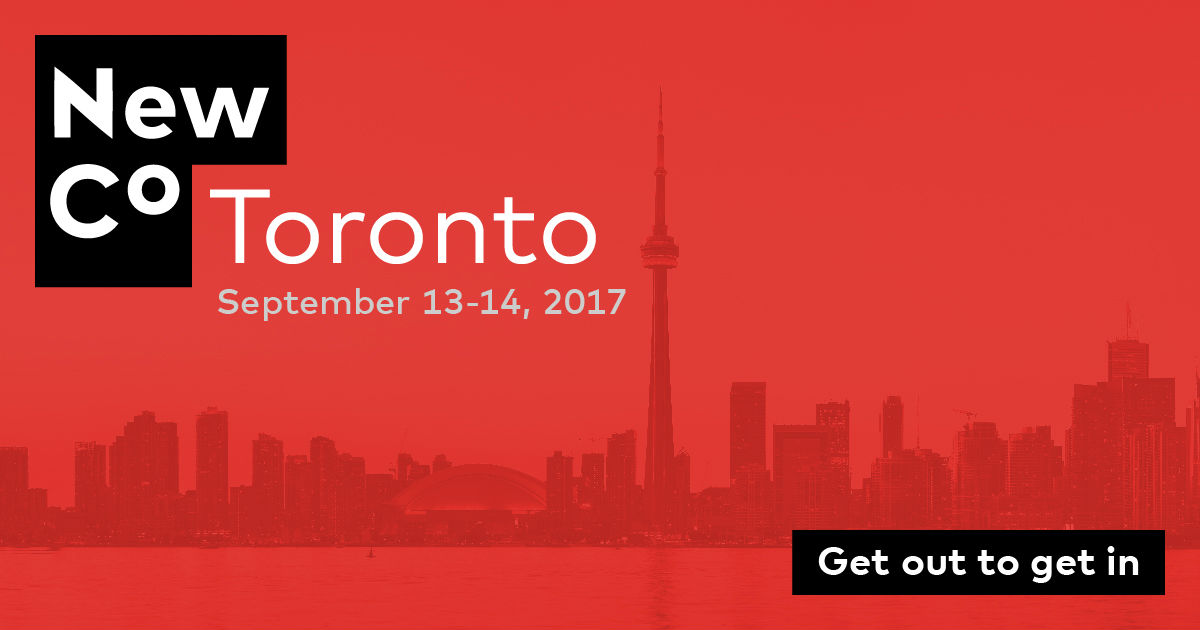 I’d also like to acknowledge the companies that opened their doors to me on NewCo day which was included as part of the Elevate Toronto Festival:

Rangle.io – thank you for generously offering lunch to all conference attendees

G Adventures – best meeting rooms I have ever seen

UNTIL NEXT YEAR – ELEVATE TORONTO FESTIVAL 2018 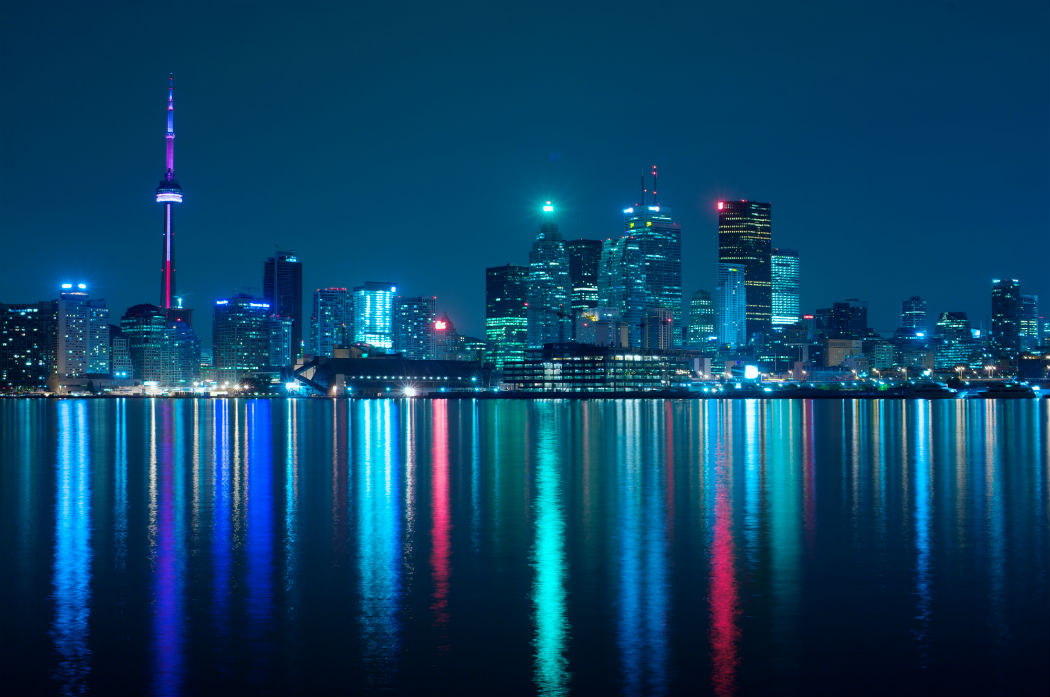 These are just some of the highlights from the 2017 Elevate Toronto Festival.  Check out http://elevatetoronto.com/ for the full details of what went down.

I encourage you to invest your time wisely and attend events such as this. It is important to take the time to open your mind to new ideas and concepts, great people, and have some fun (and great food!) along the way.